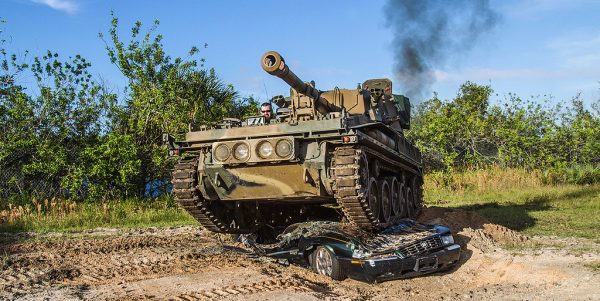 Dad’s can be hard to shop for, especially if your dad is not like other dads. If he doesn’t need a new shaving kit or leather toiletry bag — then here are some ideas that won’t disappoint (for once).

For the Extreme Dad

For the dad that truly believes that if you’re not first, you’re last — Florida-based firm Raptor Aviation should be able to hook you up with either a Mikoyan-Gurevich fighter jet, or there are apparently a “handful of MiG-21UM fighters, the Soviet-made response to the F-4 Phantom II available with both Soviet and Polish markings” available.

If he wants to go fast, but also simultaneously feel the wind in his hair — there is also the opportunity to fly like a squirrel with a Wingsuit. Up to you if you want to run the safety considerations past him by leaving it in fine print on the card.

“…wingsuiting adds a degree of complexity to skydiving, with risks such as flat-spins (uncontrollable spinning), burble (a vortex in the parachute deployment area), tail-strikes (hitting an aircraft’s tail on exit), twists (a spinning parachute), extra material to manage during a malfunction, and difficulty in depressurising wings prior to parachute deployment. Failure to handle these issues has been known to cause fatal injury.”

For the Outdoor Dad

If saving or making money is their favorite hobby, then risking your life in the name of a good day on the lake has to be a close runner-up. If you have access to a lake at any point this summer, buy a speedboat and deluxe tube with a few built-in safety features so that you live to tell the tale, and let them throw you around. As they say,”if your dad didn’t try to sling you off that tube into another dimension, you ain’t been to the lake folks.”  One of the 10 fastest boats should suffice, although the submarine could cause some problems for you. Maybe bring your scuba gear?

For the Badass Dad

Teach him how to drive a tank and shoot a flamethrower. You never know when this skill will come in handy and some of Tank America’s packages are surprisingly affordable. If you’re in Texas, there are unsurprisingly no shortage of options as to where to go to drive tanks and operate a flamethrower. Bring the kids and make it a family outing with Drivetanks.com (there are seriously no age restrictions).

For the Frugal Dad

What would he love more than anything? His money back. Ask to borrow a large sum of money from him today — like an amount that makes him wonder if you’re involved in organized crime. Then, give it back to him on Sunday in a metal briefcase. He’ll assume his good deed saved your life, but parents like to come through for their adult kids. Either way, you come out on top.

Or be boring and just buy him some socks…but ones with YOUR FACE on them.

At the end of the day, parents value time with their kids, but if you feel the need to overcome years of disappointment and forgotten commercially driven holidays… we have you covered.