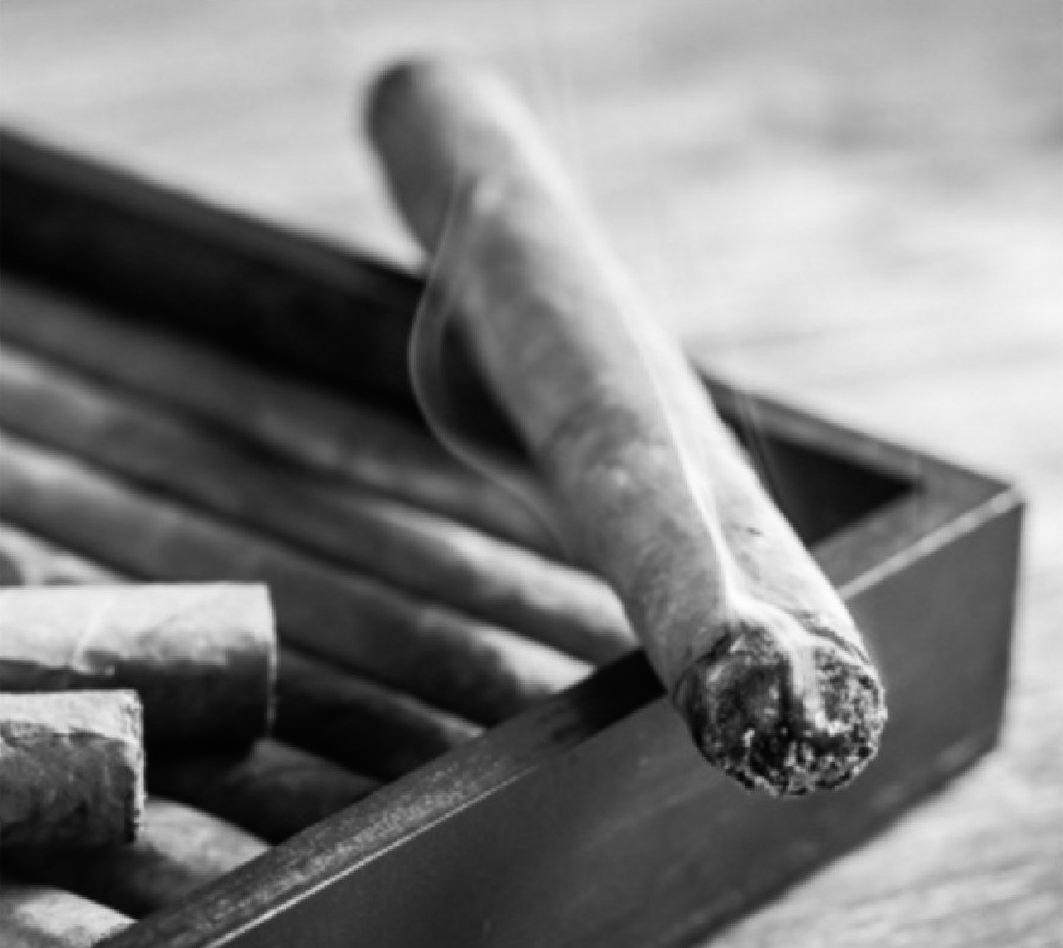 Cigars are one of man’s favorite traditions. It’s a time to relax and indulge in conversation about deep subjects or light hearted banter. As easy as conversation comes during a smoke, it can be difficult to break into the scene. Before you get educated on the basics you must remember two rules. First: do not inhale, cigars are for puffing. Second: do not ask to try someone’s cigar. It’s rude and amateurish. If they offer a puff or two, go ahead. Otherwise, smoke your own!

Cigars are measured in two ways- diameter and length. Diameter is ultimately called the ring gauge. The ring gauge is measured in 64th’s of an inch. That means if you had a cigar in your hand with a gauge of 64 it would be an inch thick, but you’re not likely to see one of those. As you’ve probably guessed, the size of a cigar directly correlates to the time it will take to smoke. Each size has a different title as well. To spare you the intricacies, here are three popular types:

Most beginners assume the color of a cigar relates to the strength. The darker cigars being stronger and lighter being more mild. In most cases that’s accurate, but not always. Cigars can range in color from light green and pale yellow to jet black. As a general rule, stick to lighter colored cigars at first. Once you’re comfortable, branch out and try darker ones. A good rule of thumb, or nose, is to smell each cigar. Your nose won’t lie to you.

When it comes to body, flavor, and strength they may seem like the same thing at first. After a couple smokes you’ll start to notice the differences. The body refers to how the smoke feels in your mouth when you puff. Words like heavy, medium, and light are used. This can only be experienced through trial and error. Flavor, of course, refers to how the smoke tastes. At first you won’t be able to pick out cocoa or cedar, but you’ll definitely taste tobacco. Start with lighter flavored cigars to get acquainted. The strength can be compared to alcohol. It’s how intensely you feel the effects of the nicotine. You’ll know when you have the perfect cigar when all three of these work together for a relaxing, enjoyable smoke.

There are different ways to cut the end of a cigar, but the two most popular are a straight cut with a guillotine cutter and punch cut with a cigar punch. The guillotine makes a larger cut and allows more smoke to flow through. A punch cut creates less of a chance for the binder to unravel. As with most aspects of cigar smoking, this is all up to preference.

If you’re feeling really barbaric you can bite the end, but this is not recommended in the slightest. It does work in a bind, though.

In order to light your cigar the proper way, try to use a butane lighter or wood matches. Toast the end of the cigar first. Toasting means holding the cigar at a 45 degree angle with the flame barely touching the end. Do this until it starts to slightly glow. Not everyone does this, but the thinking goes toasting the end makes the ash burn evenly. The last thing you want is one side of the cigar to burn faster. When you’re ready to light, hold the flame about an inch from the end and start puffing. Turn the cigar over several times to light all of it. When it starts to flame up on its own, that is when you know it’s ready. Finally, it’s time to sit back with a glass of whiskey and let the conversation flow.

The price of a cigar is not important. There are cheap options, and you’ll know those when you see them. However, there is no increased level of enjoyment in going from a $5 cigar to a $15 cigar. Don’t brag about how much you spent, just smoke what you enjoy.